Logic Rivers are one of the powerful engines of Rivery.

You can use Logic Rivers for orchestration of your data workflow and to build your data warehouse using in-database transformations.

In a Logic River, users can orchestrate a series of logical steps without any coding. Each step can perform a different type of process on your data.

Once you create your first steps of a Logic River, you can wrap them in a container to organize your workflow. Containers enable you to group different logic steps together to perform the same action on them. For example, you can group multiple Data Source to Target Rivers (this is the ingestion river type) together in a single container and set the container to run in parallel, so that all jobs are kicked off at the same time. When all steps in the container have completed successfully, the following step will run.

Another user-friendly feature is the ability to disable any container or logic step in the workflow. This makes the building of a Logic River a truly modular process, as I can disable longer running parts of my river while developing and testing a different step.

The results of your source query can be stored into a database table, file storage, or a variable.

When saving into a database table, all you have to do is specify the desired table name and location for the query results to land. Rivery supports multiple loading modes (Overwrite, Upsert-Merge, and Append). This takes no initial setup on the database side - if a table doesn’t yet exist, Rivery will create it on the fly. No need to pre-define your table metadata beforehand!

BUT…THERE'S MORE!
In addition to enabling the orchestration of the ingestion and transforms of an entire data pipeline, Logic Rivers have a few 'tricks up their sleeve' that make for the user-friendly development of dynamic and generic data processes.

Logic Rivers provide the ability to store data values into variables and use them throughout the workflow. Variables can be stored as River specific Variables or Global Variables.

In addition to containers allowing for organization and grouping of logic steps, they can be used as a mechanism for looping or adding conditional logic to your river. Since the variable values themselves are recalculated every time the river runs, it is a truly dynamic way to develop a data pipeline. 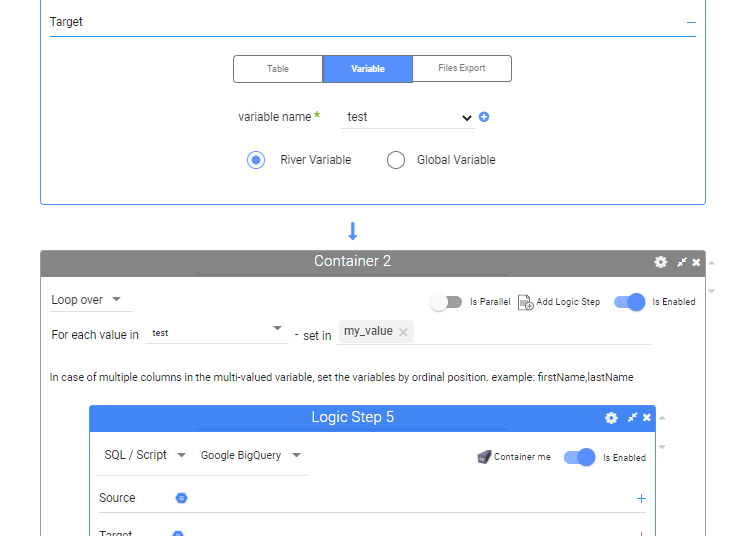 Another use case for using variables in a logic river:
By attaching the following variables:

with the following values:

One can use the date variable in the SQL script and target name: 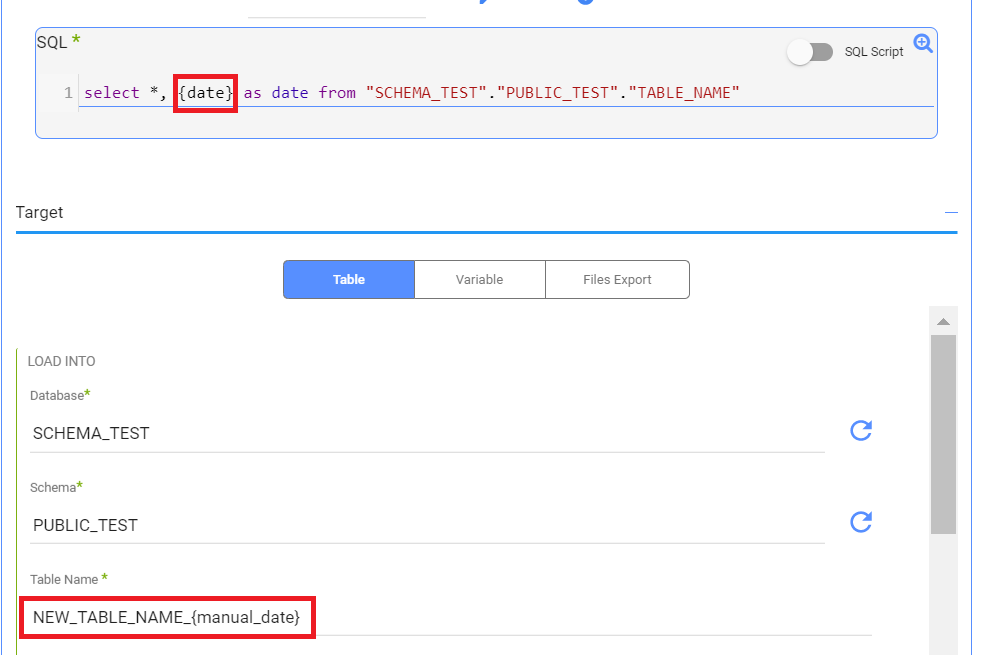 Here is an example of the received target automapping:

Was This Article Helpful?

We use our own and third-party cookies to understand how you interact with our knowledge base. This helps us show you more relevant content and ads based on your browsing and navigation history.